Introduction
The Aerospace and Defense (A&D) industry is a great example of utilization Additive Manufacturing (AM) (commonly referred to as 3D Printing) with a clear value proposition and the ability to create parts that are stronger and lighter than parts made using traditional manufacturing.

The A&D industry was a very early adopter of 3D printing and still continues to contribute heavily to its development. Some aerospace companies began using this technology as early as 1989 and over the next couple of decades, the adoption of 3D printing increased substantially. In 2015, the Aerospace & Defense industries contributed approximately 16% of 3D Printing’s \$4.9+ billion global revenues.

Integrating 3D Printing in the Design Workflow
3D printing is implemented at all stages of the design workflow for applications in the aerospace industry. Here is how:

Design communication
Designs in the aerospace industry often begin as concept models showcasing a component of an aircraft. These are often also regularly used for aerodynamic testing, which is of critical importance for aerospace. SLA and Material Jetting are used to produce high detail, smooth, scale models of aerospace designs. Accurate models allow design intention to be clearly communicated and showcase the overall form of a concept.

Validation stage
Prototyping using 3D printing is now commonplace in the aerospace industry. From a full-size landing gear enclosure printed rapidly with low-cost FDM, to a high-detail, full-color control board concept model, there is a 3D printing process suited to every prototyping need. Engineering materials for 3D printing also allow for full testing and validation of prototype performance.

Pre-production
One of the areas 3D printing has been most disruptive and valuable is the production of low-cost rapid tooling for injection molding, thermoforming and jigs and fixtures. Within the aerospace industry, this allows for tooling to be quickly manufactured at a low cost and then used to produce low to medium runs of parts. This validation mitigates the risk when investing in high-cost tooling at the production stage and can also provide production components for quantities up to 5,000 to 10,000 parts.

Production
Because production volumes in the aerospace industry are generally large (more than 70,000 parts per year) 3D printing has predominantly been used in the past as a prototyping solution rather than the manufacturing of end parts. Improvements in the size of industrial printers, the speed they are able to print at and the materials that are available mean that 3D printing is now a viable option for many medium-sized production runs, particularly for high-end interior build-outs.

Customization
3D printing technologies have a significant impact on the aerospace industry when the cost of highly complex one-off components can be justified by a substantial improvement in aircraft performance: the average corporate aircraft travel 75,000 miles per month and a single component that was designed and manufactured with 3D printing reduces air drag by 2.1%, reducing fuel costs by 5.41%! Small adjustments like this example affect life in a huge way.

Parts can be tailored to a specific aircraft (custom, lightweight bracketry) or type of aircraft (cargo, passenger or even helicopter). 3D printing also provides part consolidation and topology optimization of many custom aerospace components. This is further highlighted in the case study in a latter section.

Common 3D printing use-cases in aerospace
Jigs & Fixtures
Big benefits exist for some of the more mundane 3D printing applications, including jigs and fixtures making. For each individual aircraft, companies have hundreds of fixtures, guides, templates, and gauges 3D printed, generally with 60 to 90 percent reductions in cost and lead time compared to other manufacturing processes.

Surrogates
Surrogates are placeholder parts used throughout production that represent components that are later installed in final assemblies. Surrogates are mainly used for training. NASA and several air force bases commonly use surrogate parts on the production floor.

High detail visual prototypes
3D printing with Material Jetting is able to produce multicolor designs with a surface finish comparable to injection molding. These visually appealing models allow designers to get a greater understanding of the form and fit of a part before production decisions.

This highly accurate method of prototyping is also ideal for aerodynamic testing and analysis, as the surface finish that is able to be achieved is often representative of a final part.

3D printing is used routinely to manufacture aerospace components that rely on aesthetics over function, such as door handles and light housings to control wheels and full interior dashboard designs.

3D printing is capable of manufacturing such feature and moreover it allows the fabrication of highly complex and lightweight structures with high stability. This high degree of design freedom enables the topological optimization of the parts and the integration of functional features in a single component. Also, certain 3D printing technologies, such SLS, DMSL/SLM and Binder Jetting, are capable of small batch production at reasonable unit costs.

Consolidating assemblies into a single part
The design freedom offered by 3D printing process also allows the consolidation of multiple parts into a single component. This leads to weight savings (and thus cost reduction) and also reduces the amount of inventory kept at any time.

Surface finish
Surface finish is critical for the aerospace industry. 3D printing parts can be post-processed to a very high surface finish. Some technologies, such as Material Jetting, can produce parts with smooth, injection-molding like finish off-the-printer with little post processing needed. High performance metal parts produced with DMSL/SLM or low cost metal parts produced with Binder Jetting can also be smoothed and polished or CNC machined after printing to improve their accuracy and surface finish.

Part orientation
For functional parts that will bare load, part orientation in the build platform is very important. Due to the layer-by-layer nature of 3D printing, most parts will have anisotropic mechanical properties and will be weaker in the Z direction. This should be taken into consideration during the design process.

Supports structures
Support structures are used in 3D printing to provide a solid base for the deposition of material above overhangs or at walls with steep angles (above 45o). Support is also crucial in metal 3D printing, as it anchors the parts in the build plate and battle warping.

The areas printed on supports will have a lower surface finish and some marks from the support removal. If that is not desirable, there are processes that do not require support structures, such as SLS and Binder Jetting

The Impact
That Matters.

“One of the main applications they use 3D printing for is custom workpiece holders which mount on the machine conveyors.” 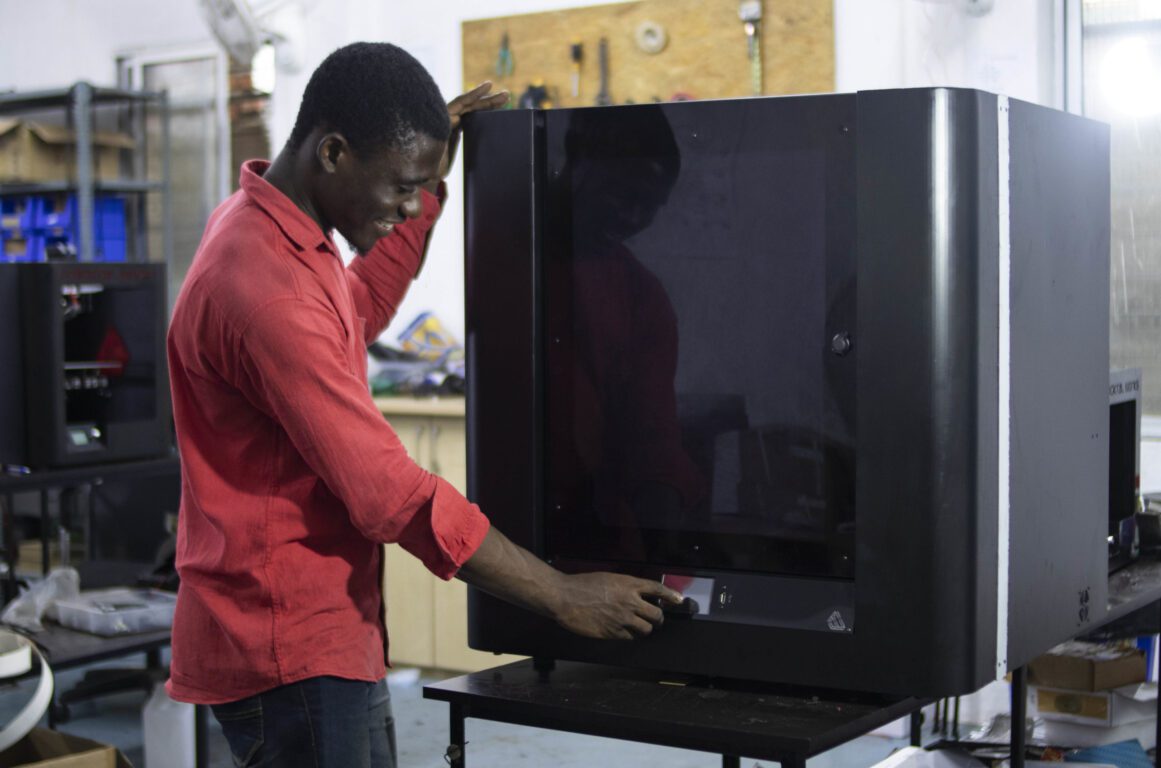 3D Printing is set to revolutionaize the way several industries work, from Medicine to Space Exploration to Education.
Learning and adopting 3D Prinring in your field may just be the Next Big Thing in your industry or workplace